Tongkat Ali: Is It Everything They Say It Is?

If you are a man suffering from the effects of sexual dysfunction such as low sex drive, sexual stamina or erectile dysfunction, and there's are millions and millions of you around the world, you may have been hearing about a so-called 'miracle plant' known by many names including Ali's walking stick, Long Jack Root or even Longjax. Its actual scientific name is Eurycoma Longifolia but for our purposes we'll being calling it by its most popular name - Tongkat Ali.

So, why has Tongkat Ali become such a mythical substance in recent years? The answer is largely due to its long and storied history which begins many hundreds of years ago in its native habitat around Malaysia, Burma (now Myanmar) and Thailand. In these far off places with ancient histories steeped in the myths of magical plants that this one gained fame as a cure for just about everything from fatigue to high blood pressure to malaria to loss of sexual desire and erectile dysfunction, as it is known today.

The two main questions are here to examine today is - does it actually work as believed by so many for long and is it safe to use. To this we must first understand just what Tongkat Ali really is, which is a natural herb. As to the question of whether or not this herb is effective, the answer is still, after all these centuries, largely up for debate. The reason for this is that, although, scientists seem to argue of what exactly in Tongkat Ali makes it so widely respected for its properties. So, just because it is hard to identify just what the actual chemicals found this plant are that can have such a great effect on so many people, especially men doesn't mean that it doesn't work.

Given all that, we are here today to look at the best evidence available both from the scientific world and the world of ordinary men and try to establish whether or not Tongkat Ali is the miracle so many people believe it is.

Before we get started let's be clear that we are not here to break down the chemical composition of Eurycoma Longifolia. No one has the time or, we're sure, the patience for the reams of biological data that plant nerds might want to dig deep into. What we do want to do is look at the type of evidence that can clearly show whether or not Tongkat Ali deserves its reputation. To do that there two key areas which we will need to look at. One is related to the claims made throughout history but, more importantly, today and the products in which it is used. The other is what real life users of this natural extract in all its many forms say with regard to what is actually doing to help them. 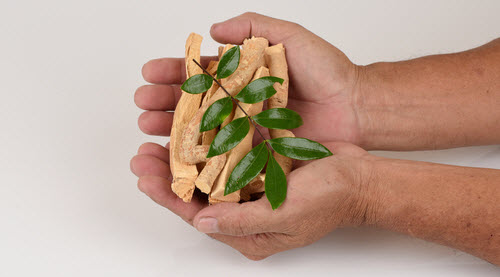 Obviously, in the distant past, there were no real commercial brands of products containing Tongkat Ali but there was a huge market for the plant in Asia which eventually branched out along with so many other products to the west along the Silk Road and to the east through sea trade. Eventually, the prized herb and its reputation was incorporated in a huge number of products sold commercially in through advanced western markets in Europe and the Americas. These products included everything from elixirs that claimed to cure everything from fevers to infertility to even more serious conditions like cancer. In the end, these products slowly disappeared as consumers became more sophisticated and governments began to regulate the real charlatans out of the business world.

Around the beginning of the twentieth century large businesses dealing with medicine and other health related products such as supplements began to rely heavily on academia and the scientific world to discover, test and formulate products that could meet the requirements of regulations. It was these companies and their products that would go on to great success in the century since then. It was this environment that helped to separate Tongkat Ali from many of the other so-called 'miracle drugs' of that time. And, it was science and testing that raised the herb from a mysterious plant from the East to one of the most sought after ingredients used in hundreds if not thousands of products that are available on the market around the world today. Perhaps, one of the most impressive uses for Tongkat Ali has been in the field of male enhancement products where its properties have been shown to increase sexual drive and, perhaps even more importantly, actually increase testosterone levels in its male users.

Now, the question is, "Why is its ability to boost testosterone so important and what does that really mean for the user?" Well, to put it simply, there is a huge market around the world for all natural and cost effective ways to alleviate the symptoms of sexual dysfunction and it has been found that the best way to do that is to significantly boost testosterone levels. The reason for this is that, as men age, their natural production of testosterone by their own bodies begins to decrease. This decrease speeds up rapidly after about the age of thirty for most men. The result of this testosterone loss leads directly to the ever increasing increase in symptoms of sexual dysfunction - most notably, erectile dysfunction. This being the case it has become clear that the one thing that men suffering from this condition want is a safe, effective and affordable way to counteract this problem. And, since Tongkat Ali is relatively inexpensive and in great supply, it's no wonder so many manufacturers of male enhancement supplements are using it as a primary ingredient. The real problem that consumers have to be wary of is that so many of these manufacturers either have no idea of the science involved in formulating a product composed of Tongkat Ali and a mixture of other highly beneficial ingredients or the simply just don't care if their product is safe and effective. To know which is which a potential consumer must do their research in order to find the product that truly delivers a great formula.

Again, considering that the scientific world is still debating the reasons that Tongkat Ali is so effective, it's very difficult to know just how to measure what the proper amount of Tongkat Ali should be within any specific formula. Knowing this, the best way, as we see it, to determine which products are best is to simply look at what actual, real world users are saying about their experiences with it.

Tongkat Ali is one of the oldest and most well-recognized herbal based remedies in the world. Its history of success in treating so many different ailments, especially in relation to sexual dysfunction is nothing short of legendary. Because of that it has become an industry standard as a main ingredient in supplements that are designed to greatly increase testosterone levels in men suffering from this condition. As a result we highly recommend that any man looking to revive a diminishing sex life and take a giant step toward returning to the man he once was should take a serious look at products that base their formulas around a significant dose of Tongkat Ali.

For more information about products with high levels of Tongkat Ali and a strong level of positive independent reviews by actual, real world users, click here.